Actor, writer, director--Greta Gerwig has shone in multiple roles during her short yet profoundly influential career. This February, The Roxy celebrates five of the major achievements of this singular presence in contemporary American film. We're showcasing her star-making performances in Frances Ha, Mistress America, and Greenberg and the masterpieces she wrote and directed, Little Women (closing off its phenomenal run at The Roxy with a week of 35mm) and Lady Bird. It's just our way of showing our Greta-tude.

In Lady Bird, Gerwig reveals herself to be a bold new cinematic voice with her directorial debut, excavating both the humor and pathos in the turbulent bond between a mother and her teenage daughter. Christine “Lady Bird” McPherson (Saoirse Ronan) fights against but is exactly like her wildly loving, deeply opinionated and strong-willed mom (Laurie Metcalf), a nurse working tirelessly to keep her family afloat after Lady Bird's father (Tracy Letts) loses his job. Set in Sacramento, California in 2002, amidst a rapidly shifting American economic landscape, Lady Bird is an affecting look at the relationships that shape us, the beliefs that define us, and the unmatched beauty of a place called home. 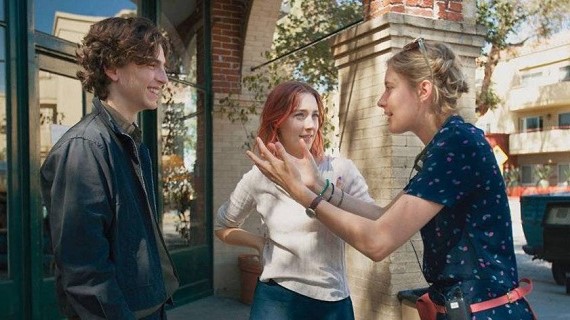